Download a PDF version of “About the Breed and the Standard”

The Doberman Pinscher Standard is probably one of the most precise and clearly written standards existing today. It leaves very little out, and clearly states that any deviation from it’s description is penalized to the extent of that deviation. If it is NOT stated in the standard, it IS a deviation — that’s very clear! 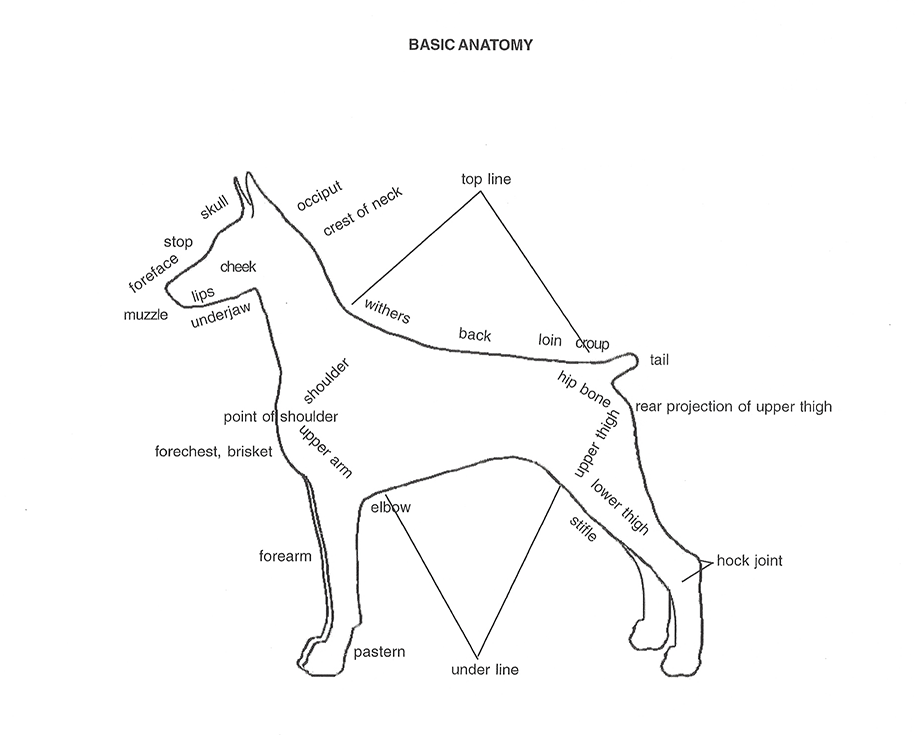 To understand Doberman structure, it’s important to know its original purpose. The Doberman was originally bred for its character, but physically designed to be geometrically and esthetically perfect. It began with what they wanted the dog to be —watchdog, guard dog, fearless, a short-backed galloper, agile, fast, powerful and sturdy, to mention just a few qualities. Features for beauty were “built in” to the mathematical outline.

The standard, from beginning to end, demands an orderly and harmonious arrangement of parts to create a statically and kinetically balanced dog. Thus, whether the dog is standing or moving, the parts must be in total harmony. The impression of the dog should be the same, whether the dog is in motion or stationary. The key to the Doberman is balance and proportion. All the parts fit together smoothly with no distractions. If any part stands out, whether good or bad, it takes away from the total picture and the balance and proportion is disrupted. As you go through the standard, you will see just how specific the description of the Doberman Pinscher is. Some points are so important, they are referred to in more than one section of the standard. To ignore the standard is an injustice to the breed and will change the Doberman Pinscher forever

The appearance is that of a dog that is of medium size, with a body that is square. Compactly built, muscular and powerful, for great endurance and speed. Elegant in appearance, of proud carriage, reflecting great nobility and temperament. Energetic, watchful, determined, alert, fearless, loyal and obedient.

Height at withers: Dogs 26 to 28 inches, ideal about 27½ inches; bitches 24 to 26 inches, ideal about 25½ inches. The height, measured vertically from the ground to the highest point of the withers, equaling the length measured horizontally from the forechest to the rear projection on the upper thigh. Length of head, neck and legs in proportion to length and depth of body.

Long and dry, resembling a blunt wedge in both frontal and profile views. When seen from the front, the head widens gradually toward the base of the ears in a practically unbroken line. Eyes almond shaped, moderately deep set, with vigorous, energetic expression. Iris, of uniform color, ranging from medium to darkest brown in black dogs; in reds, blues and fawns the color of the iris blends with that of the markings, the darkest shade being preferable in every case. Ears normally cropped and carried erect. The upper attachment of the ear when held erect is on a level with the top of the skull.

Top of skull flat, turning with slight stop to bridge of muzzle, with muzzle line extending parallel to top line of skull. Cheeks flat and muscular. Nose solid black on black dogs, dark brown on red ones, dark gray on blue ones, dark tan on fawns. Lips lying close to the jaws. Jaws full and powerful, well filled under the eyes.

Teeth strongly developed and white. Lower incisors upright and touching inside of upper incisors — a true scissors bite. Forty-two correctly placed teeth, 22 in the lower, 20 in the upper jaw. Distemper teeth shall not be penalized. Disqualifying faults: Overshot more than 3/16 of an inch. Undershot more than 1 /8 of an inch. Four or more missing teeth.

Neck proudly carried, well muscled and dry. Well arched, with nape of neck widening gradually toward body. Length of neck proportioned to body and head. Withers pronounced and forming the highest point of the body. Back short, firm, of sufficient width, and muscular at the loins, extending in a straight line from withers to the slightly rounded croup. Chest broad with forechest well defined. Ribs well sprung from the spine, but flattened in lower end to permit elbow clearance. Brisket reaching deep to the elbow. Belly well tucked up, extending in a curved line from the brisket. Loins wide and muscled. Hips broad and in proportion to body, breadth of hips being approximately equal to breadth of body at rib cage and shoulders. Tail docked at approximately second joint, appears to be a continuation of the spine, and is carried only slightly above the horizontal when the dog is alert.

Shoulder blade sloping forward and downward at a 45 degree angle to the ground meets the upper arm at an angle of 90 degrees. Length of shoulder blade and upper arm are equal. Height from elbow to withers approximately equals height from ground to elbow. Legs seen from front and side, perfectly straight and parallel to each other from elbow to pastern; muscled and sinewy, with heavy bone. In normal pose and when gaiting, the elbows lie close to the brisket. Pasterns firm and almost perpendicular to the ground. Dewclaws may be removed. Feet well arched, compact and catlike, turning neither in nor out.

The angulation of the hindquarters balances that of the forequarters. Hip bone falls away from spinal column at an angle of about 30 degrees, producing a slightly rounded, well filled-out croup. Upper shanks at right angles to the hip bones, are long, wide, and well muscled on both sides of thigh, with clearly defined stifles. Upper and lower shanks are of equal length. While the dog is at rest, hock to heel is perpendicular to the ground. Viewed from the rear, the legs are straight, parallel to each other, and wide enough apart to fit in with a properly built body. Dewclaws, if any are generally removed. Cat feet as on front legs, turning neither in nor out.

Allowed colors: Black, red, blue and fawn (Isabella). Markings: Rust, sharply defined, appearing above each eye and on muzzle, throat and forechest, on all legs and feet,\ and below tail. White patch on chest, not exceeding ½ square inch, permissible. Disqualifying Fault: Dogs not of an allowed color.

Free, balanced and vigorous, with good reach in the forequarters and good driving power in the hindquarters. When trotting, there is strong rear-action drive. Each rear leg moves in line with the foreleg on the same side. Rear and front legs are thrown neither in nor out. Back remains strong and firm. When moving at a fast trot, a properly built dog will single-track.

Energetic, watchful, determined, alert, fearless, loyal and obedient. The judge shall dismiss from the ring any shy or vicious Doberman.

Shyness: A dog shall be judged fundamentally shy if, refusing to stand for examination, it shrinks away from the judge; if it fears an approach from the rear; if it shies at sudden and unusual noises to a marked degree.

Viciousness: A dog that attacks or attempts to attack either the judge or its handler is definitely vicious. An aggressive or belligerent attitude towards other dogs shall not be deemed viciousness.

The foregoing description is that of the ideal Doberman Pinscher. Any deviation from the above described dog must be penalized to the extent of the deviation.