A Champion Breeder, Staines Also Trained Pinschers as Guide Dogs for the Blind

Born on November 15, 1886, Glenn Scott Staines was the only child of Michigan farmers William J. and Nellie Scott Staines. After earning a B.S. degree is Pharmaceutical Science he opened his own business in 1909, Glenn’s Pharmacy, in Detroit.

In 1917, after the sinking of seven US merchant ships and the publication of the Zimmermann Telegram, President Woodrow Wilson declared war on Germany and the United States joined in the Allied Powers. As described in Wikipedia: “The Zimmermann Telegram (or Zimmermann Note) was an internal diplomatic communication issued from the German Foreign Office in January, 1917 that proposed a military alliance between Germany and Mexico in the event of the United States’ entering World War I against Germany. The proposal was intercepted and decoded by British intelligence.”

President Wilson had up to this point been neutral regarding the war despite heavy criticism, even after the unarmed British liner Lusitania was sunk by a German submarine with a loss of almost 1,200 lives including 124 Americans. 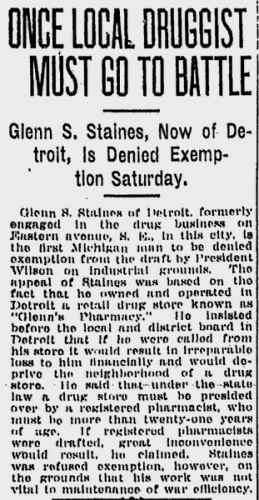 Glenn sought exemption from the draft as the owner and operator of a drug store in Detroit, noting that being called to war would result in “irreparable loss to him financially and would deprive the neighborhood of its drug store.” Staines was the first Michigan man to be denied exemption by President Wilson on the grounds that his work was not vital in maintenance of war efficiency.

Glenn married a stenographer named Pearl from Long Branch, New Jersey, on June 28, 1919 but the union was not a happy one. The couple divorced on October 15, 1923, and had no children.

In 1920, after Jiggs, his pit bulldog, died in a drowning accident, a friend sent him his first Doberman, a bitch named “Judy of Detroit.” Glenn was completely taken by the breed and started his own breeding program under the name Pontchartrain Kennels. In 1927, he imported Lux v d Blankenburg. Lux had become one of Germany’s all-time leading sires and contributed significantly to bringing Doberman quality back to Germany after the breed’s near devastation during World War I.

Lux produced 19 American champions for Pontchartrain and more than half of the American champions completing title between 1946 and 1950 could trace their ancestry back to him. He lived a long, full life dying ,at age of 13 in 1931.

In 1921, a group of Doberman fanciers led by George H. Earle, III formed the Doberman Pinscher Club of America. Glenn Staines drew up the Articles of Incorporation and served as the club’s first President from 1929-1931.

It has been well-documented that Glenn was passionate about training Dobermans as he believed that their intelligence made them well-suited for many different things. As a result, he started breeding more for working ability instead of solely focusing on conformation. This was really the beginning of the split between working and conformation breeders but it had not yet grown to the point where it compromised friendships. Joanna Walker and Frank Grover both wrote about Glenn and his good friend Francis Fleitmann of Westphalia. Joanna wrote that because judges favored the Westphalia type of dog, Glenn gave up showing to concentrate on training his own line. Frank wrote:

“Mr. Staines believed that the working Doberman was the ideal. He bred Dobermans within standards yet concentrated more on the dog’s abilities. Mr. Fleitmann concentrated on the physical aspects of the Doberman. He was favored by the judges in the breed ring. The two men agreed to disagree when it came to the virtues of the Doberman.”

It was in 1929 that Glenn hired Willy Necker, a dog trainer that stayed with Glenn until 1937 when he moved to Wheeling, Illinois, and opened his own training kennel. Kate Kelly wrote an article on Willy and provided information on his career in training dogs, some of which is produced here:

“Willy Necker was born in Stuttgart, Germany in 1909. His father was a building contractor who raised dogs as a hobby so Willy grew up with a deep interest in dogs, spending as much time as he could working with them. In 1929 when Willy was twenty, he came to America intending to get work as a carpenter, the job for which he had trained. However, work was hard to find in 1929 so when a kennel job in Detroit presented itself, Necker was happy to take it.”

During the war, Necker was lieutenant commander of the U.S. Coast Guard War Dog Unit which trained several thousand Dobermans and German shepherds as guard dogs. Many of these dogs were used to patrol the coastlines of the United States but some were also sent to the Pacific with the Coast Guard to work as attack and messenger dogs. 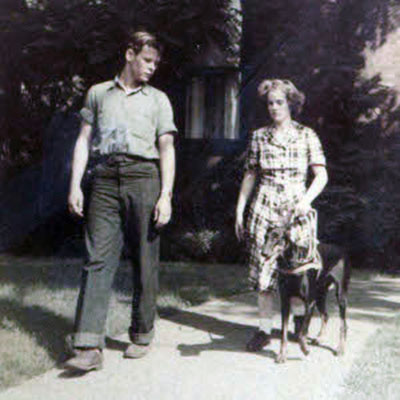 Joanna Walker tells us that Glenn also worked with Roy Lewellen, a veteran animal trainer who had worked with Barnum & Bailey and Clyde Beatty. It was during this period that he had 100 dogs of various breeds in training.

It was a chance meeting with a blind man named T.W. Pritchett that changed Glenn’s direction. Joanna Walker describes what happened:

“It was in 1936 that he met a man who introduced him to T.W. Pritchett, a blind man from Evansville, Indiana, who had been turned down by a guide dog school as being too old to use a guide dog. At the time, Walter Lindner was training Pontchartrain dogs and they decided to try to train a dog for this man. Quite unexpectedly the man showed up at the kennel before they had finished training the dog. He was, no doubt, anxious to meet his dog, and since he was without enough funds to travel back and forth, they agreed to let him stay. They got busy with some very intensive training of man and dog. A few weeks later the old man left with the very first Pathfinder Doberman, trained as a guide dog. This team of man and Dobe was most successful and from then on Glenn’s whole life and interest turned to training Dobermans as guide dogs. This dog guided Mr. Pritchett for the next nine years.”

In 1938, the Uptown Detroit Lions Club decided to pay the expenses for a blind man who wanted a guide dog. They contacted the only guide dog facility in America at that time and were turned down because the school had a policy that clubs or organizations could not sponsor specific individuals. They decided that the answer was to open a school of their own and they hired Glenn to teach students how to train guide dogs. The Lions Club school was eventually named “Leader Dogs for the Blind” and is now the largest organization of its kind.

As Joanna noted above, because of these rewarding experiences in working with the blind, Glenn Staines devoted the rest of his life to training guide dogs through his Path-Finder school. Path-Finder was very successful up until his death in 1951. Joanna writes:

“By 1951, over 1,000 Pathfinder Dobermans had been placed with blind owners. The normal cost for these dogs was $200 to cover the cost of the care of the dog for four months of training. This was the only way Glenn could help as many blind people as he did. He sunk just about everything he made in his drug store into the school. He also donated many dogs to those who simply could not pay and in 1945, he offered dogs free to blinded veterans.”

Pathfinder dogs were in demand right up to June 25, 1951, when Glenn Staines suffered a massive stroke which left him nearly blind. He died on July 7, 1951, at the age of 64. His obituary from the annual Doberman issue of Dog News 1951 follows: 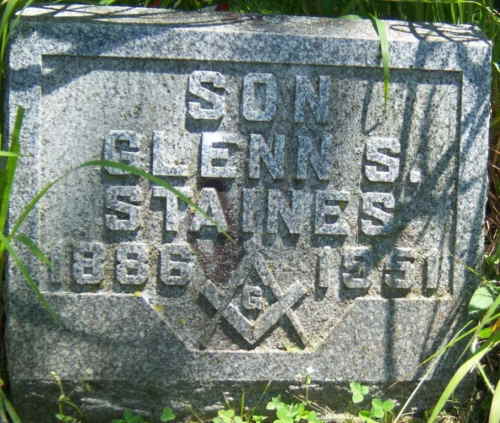 “Had you been at Glenn’s funeral the wealth of floral offerings would have mutely told you of the affection and respect with which thousands of people throughout the country regarded him, but it would have been the many, many blind people with their Doberman guide dogs which walked down the aisle of the chapel at the funeral that would have made you realize that as great as Glenn’s contributions were to every phase of Dobermans, it was the Pathfinder project which will serve as an everlasting tribute to his memory.”

Learning about our founders and pioneer breeders is very rewarding. Their irreplaceable contributions are why we have what we do today and Pat Trotter’s words always come back to me. “Those of us that breed and show dogs are standing on the shoulders of the giants that came before us.”

We are very blessed to have Glenn Staines in our breed’s history. I do not think the DPCA could have had a more worthy first President. He was, indeed, a giant.

Information gathered from this compilation article came from the following sources: