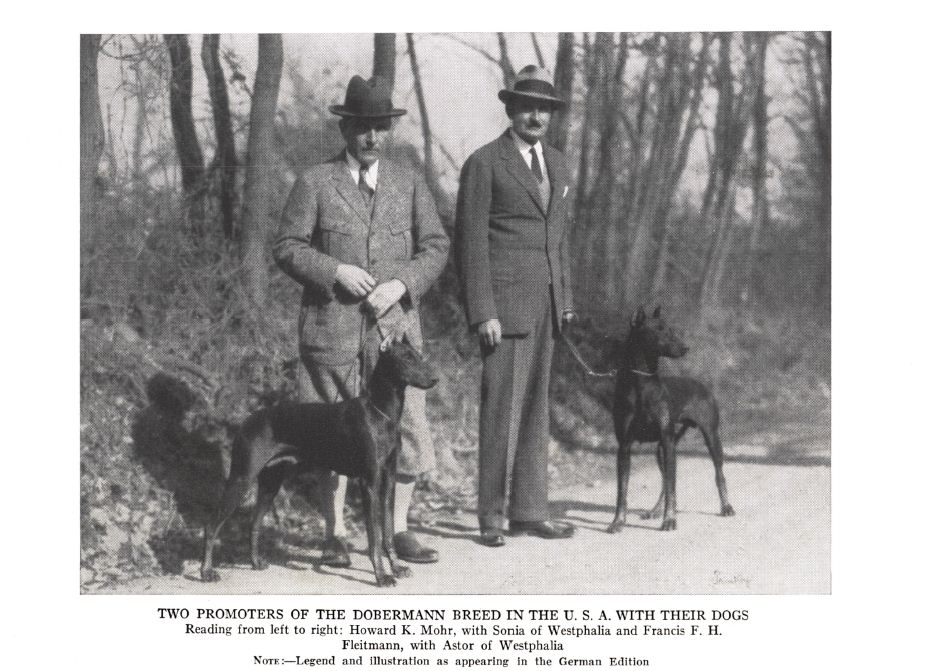 From the book, “The Doberman Pinscher: History and Development of the breed,” by Philipp Gruenig. 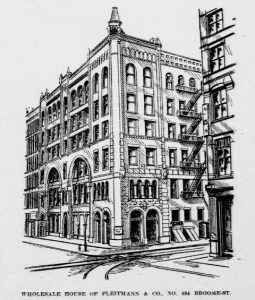 On March 24, 1895, Francis FH Fleitmann was born into the American aristocracy. In the October 1867 issue of News & Tall Tales, a segment was devoted to American millionaires. The article mentions the “Super Tycoons” that everyone knows about like Andrew Carnegie, JD Rockefeller and JP Morgan but the main focus was on those individuals “never before reckoned” and included the men who ran the dry goods houses. The list included, among others, Marshall Field of Chicago, Levi Strauss of San Francisco and Ewald and Hermann Fleitmann of New York.

Brothers Ewald and Hermann Fleitmann arrived in New York from Germany in 1864, started Fleitmann & Co. and became one of the largest commission merchants in the city earning $10,000,000 annually. The New-York Tribune said “No leading drygoods firm in New-York City is more closely identified with the wonderful march and progress of that branch of trade than Fleitmann & Co. As leaders in the domestic lines of drygoods, the firm of Fleitmann & Co. is just as universally and favorably known as importers. While carrying an enormous stock of domestic goods, the firm imports the richest and finest qualities of silks, ribbons, velvets, malines, chiffons, satins, woolens, worsteds, cloaking and broadcloths, the output of the greatest manufactories and the most renowned looms of Europe and Asia.” Ewald Fleitmann, in particular, embraced New York and over time he served on the boards of various clubs and banks. 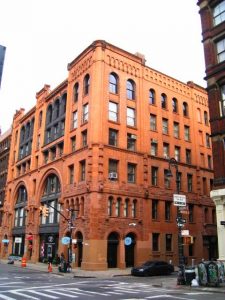 Francis, who preferred to be addressed by his second middle name “Herman,” was the grandson of Hermann Fleitmann. His parents were Frederick Theodore and Amelie Caroline Fleitmann. From public records, we know the following: Francis went to Berne, Switzerland in 1911 to study in Germany; he returned to New York in 1915 and began working at his family’s company; he was listed as a passenger on many ships going to Europe for business over the course of many years; and, he was 22 when he enlisted in the Army during World War I and served overseas from May 3, 1918 to August 1, 1919.

He shared his love of purebred dogs with his second cousin, Henry Theodore Fleitmann, who appears to have been a mentor to the younger Francis. In the February 14, 1934, list of AKC Delegates, Henry is listed as delegate for the American Sealyham Terrier Club and Francis is listed as delegate for the Dachshund Club of America. Both became AKC judges and Francis was licensed for the working group which he judged at Westminster three times. Henry judged the Terrier group at Westminster in 1912.

The headline of the covering story for The New York Times humorously reads: “Judge Fleitmann chases Scottish Terriers out of ring for being too noisy!” 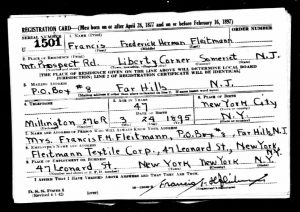 In regard to Henry, he was the son of Ewald and his wife, Katie. An article about the history of Fleitmann & Co. notes that Hermann eventually returned to Germany, leaving Ewald to run the business. Ewald was assisted by the second generation of Fleitmann’s, Frederick T., Herman C. and William M., but his own son Henry T. Fleitmann was more interested in breeding Scottish Terriers than in silk goods.

Henry’s involvement with Terriers of all kinds is well documented. The Early History of the Kerry Blue Terrier in the United States of America notes that in the early 1920s, “Mr. James McCashin and Mr. H. Fleitmann were showing a brace of untrimmed Blue Black Terriers in the Miscellaneous Classes at Westminster. These two old Terrier men considered the Blue Terrier as just a passing fad.”

The Fleitmann family was from Schwerte, which was part of the Prussian Province of Westphalia when Ewald and Hermann were growing up there. After moving to New York, they still owned real estate in that region, which they had inherited from their parents. Their holdings included a family forest in the Township of Westhofen and an old family garden with an enclosed pasture adjoining on the Ostenbrach. Given the Fleitmann’s family history and continued association with this region, it is clear why Francis chose “Westphalia” as his kennel name. 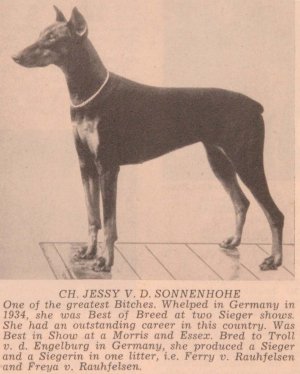 Anna Katherine Nicholas has provided us with information about Francis’ important role in the history of our breed, calling him the most celebrated Doberman owner in the breed’s early history. She goes on to say, “Westphalia Kennels became renowned for both excellent importations and outstanding homebreds. Mr. Fleitmann was a true authority on this breed. Judge, scholar, widely travelled and thus personally acquainted with the breed on both sides of the Atlantic, he was looked upon as a fountain of knowledge, and his success as a breeder almost seems to have been inevitable considering his degree of interest, time and money invested, and his natural instinct for quality.”

Arguably, his best import was Jessy, Ch. Jessy vd Sonnenhoehe. Historian Margi Bragg writes: “Born in 1934, Jessy was a marvel in every way. She was the first to win the Sieger show twice, although she did not become Siegerin the first time because of her lack of a working title (1936 and1937). She was the only dog to produce a Sieger (Ferry) and Siegerin (Freya) in the same litter (1938).” (http://www.adpef.org/breed_development/first_half_century/a_doberman_coup)

Margi’s article also includes a letter written by Ellie Buckley (Francis’ kennel manager) to Vivian Edwards of Rancho Dobe Kennels. Ellie told Vivian that the first time Francis saw Jessy he fell in love with her and he made another trip to Germany just to bring her home. The letter relays what Francis Fleitmann thought of breed development in the United States and what he wanted to attain. Jessy fit into his vision of a near perfect Doberman and she contributed greatly to the success of Westphalia.

Speaking of Ellie Buckley, she became a Papillon breeder and in 1930 was one of the founders of the first Papillon Club of America. In 1935, Mr. Herman (Francis) Fleitmann was elected as the Papillon club’s first delegate. I think you’ll find the details of that history interesting because other Doberman breeders were also involved in founding the Papillon club (https://www.papillonclub.org/History/History-FiftyYears.html).

Francis Fleitmann gave us many glorious years and his dogs continued to win even up to the end of his breeding program. His contributions to our breed’s development are immeasurable. His imports and breeding choices helped form the foundation of what we have today. He was in every measurable sense a true breeder, who dedicated his life to improving the health, temperament and quality of the Doberman Pinscher breed.

Arguably, his best import was Jessy, Ch. Jessy vd Sonnenhoehe. . . . a marvel in every way . . .  Jessy fit into his vision of a near perfect Doberman and she contributed greatly to the success of Westphalia.